He is the adoptive son of Odin and an enemy of the Avengers, S.H.I.E.L.D. Team, S.M.A.S.H. and Guardians of the Galaxy as well as the arch-nemesis of his adoptive brother Thor.

Born to Laufey, king of the Frost Giants, Loki was adopted by Odin upon his father's defeat. He was brought up alongside his adoptive brother Thor, whom he held a massive grudge against. After failing to prevent Thor from becoming worthy of Mjolnir, he became a villain and an enemy of the Avengers. Loki possessed the Destroyer and fought Drax the Destroyer. When the Guardians of the Galaxy arrived at Asgard, Loki brainwashed Thor and Angela into thinking they are Spartax warriors and sends them to fight the Guardians, but ultimately fails. Asgard and Spartax declare war on each other, and seeing an opportunity, steals the Cosmic Seed from J'son and frames the Guardians before possessing the Destroyer to attack the forces of both Asgard and Spartax. When Thanos kidnaps Star-Lord and takes the CryptoCube, Loki in the Destroyer is forced to ally with Thor, Angela and the Guardians to save him. Loki is later imprisoned for his crimes, but an army of Symbiotes possess Odin and many citizens of Asgard, and now plan to invade Earth, so the Guardians release Loki to defeat them. Loki proceeds to assemble an army of all the monsters across space, time and reality and uses his trickery to start Ragnarok. Thor, the Agents of S.M.A.S.H., Heimdall and the Warriors Three After launching an attack on Earth, he went back to Asgard and nearly killed his father in the Odinsleep, becoming the new king. Thor, turned into a frog, Spider-Man and the S.H.I.E.L.D. Team attacked Asgard and defeated Loki upon tricking him into healing Thor. He tricked a group of hunters and led them against Spider-Man to kill him after enchanting the hero into Spider-Ham until the hunters found out the truth. Taking control of the Destroyer using a Norn Stone, he attacked the Tri-Carrier and fought Thor and the S.H.I.E.L.D. Team until they retrieved the stone. After Spider-Man joins the Avengers, Loki hires Doctor Octopus in his plot to destroy them once and for all by having him recreate the Venom symbiote and switches bodies with Spider-Man. After restoring Spider-Man to his body, he led a large army and attacked New York but was repelled by the heroes.

HLater, when Doctor Doom took control of the Destroyer armour, Thor realised he had no choice but to bring Loki for help, and begrudgingly, the Avengers accompanied him to the Dwarf Realm where they defeated Doom and the Midgard Serpent. However, Loki double-crossed them and took control of the Destroyer himself until it was damaged by Hulk and Loki was left by Thor at the mercy of Ulik and the Rock Trolls. After fooling Thor and Hulk into fighting each other, Loki teleported them all to Valhalla and left them to subject to Hela while he commandeered Hela's army of the dead and attacked New York once more where they fought the Avengers. Thor and Hulk arrived and tricked Hela and her army into dragging Loki to Valhalla to suffer as her slave for eternity. However, he finds the Space Gem and retreats to Asgard before luring Thor, Hulk and Hawkeye back to Asgard and made Thor unworthy of Mjolnir. With his army, he fought the invading Avengers until Thor became worthy again and defeated his brother, imprisoning him in the cells of Asgard. When Thor and Vision visited Asgard, Loki mocked them from his cell and warned them of Ultron, who had taken over many of Asgard's dangerous artifacts. Eventually, he freed himself from his cell and assembled Kang the Conqueror, Amora the Enchantress, The Executioner and Arnim Zola as the Cabal. He then met the powerful being Beyonder and told him of Earth, hoping the Beyonder to make it part of his secret experiment. He then instructed the Cabal to recruit Leader and feign he is their leader until they defeat the Avengers. With the pieces of his plan laid, the Avengers were scattered across reality by the Cabal. The New Avengers left the world unprotected to rescue them, allowing Loki to lead his Frost Giants and take over the Earth, changing it into his own icy fortress. When all the heroes returned, they managed to imprison Loki in his own base, but Loki's second plan took place, the Beyonder took Earth, Asgard and other pieces around time, space and reality and formed Battleworld. Feigning to join the Avengers, he helped repair Bifrost Bridge and was given the Eye of Agamotto by Doctor Strange to restore everyone home, which he did upon the Beyonder's destruction. However, he became the new Sorcerer Supreme and an all-powerful being with the Eye of Agamotto, revealing his plan and defeating Odin before summoning the All-Dark and sending the Mindless Ones to attack Earth. While the Avengers left Loki overpowered Thunderstrike, Thor and Strange before engulfing the Tree of Life with the All-Dark to destroy existence. However, the three heroes took it off and it instead destroyed Loki.

Loki is a tall man, with fair skin, blue eyes and black hair, whose length varies according to the seasons. In the first season he is short to neck height, in the second and third seasons he has long hair to the point of slightly exceeding his shoulders; Without his helmet, it can be seen that he wore a slight widow's beak, while in the fourth season, his hair is again short and somewhat scruffy, but this time sporting a slight beard for a few days.

His Asgardian attire also varies between seasons. In the first season he wears a kind of grey full-body legging, black boots that reach his calf, a ornate golden armor, along with his scepter, green cape and characteristic gold helmet with horns. In the second season his armor changes to a lighter version, the protection of the biceps and the golden lapels disappear giving the impression that he is wearing a vest although he still retains the shoulder pads and his black boots now reaches him knee.

In the fourth season her outfit changes radically, Loki no longer wears his armor but black boots with gold protections, a snug dark grey trousers an olive green shirt with golden lines, a dark green trench coat with golden shoulder pads, wears some mitten gloves in his hands and instead of his helmet he now wears a tiara with horns.

Loki is a thoughtful, manipulative man, with a vision of the future and a great strategist. He has always been naughty  and malicious by nature, Always eager to prove himself: being physically weaker than Thor, he developed a keen intellect and skill in magic to overcome his lack of combat skill. He is ruthless and stubborn, ready to destroy everything in his path to get what he wants. Sometimes you can act altruistically, however, you almost always do it because that act offers you a benefit later

In spite of his apparent hate towards his brother or his kingdom, Loki has occasionally shown worry and affection towards Thor, and he has never attempted against Odin's life even though he had a chance; what indicates that despite his feud, deep down Loki still loves his family to a certain extent.

The true thing is that, on having lived constantly in the shade of Thor, there did of an embittered, cruel and spiteful man. That said, their wishes virtually reminded of the child's need to always be the best; this also made his hatred of Thor an entirely overgrown and impractical sibling rivalry and the entirety of his actions could be intervened as purely attention-seeking, going to horrifying lengths such as the subjugation or destruction of a species. Indeed, Loki's megalomaniacal desires always thwarted by his true objective to stand superior over Thor and crush him completely, proving to Thor that he was his equal and his better, which was all he ever wanted.

Loki was not born among the Asgardians, but was the son of Laufey, king of the Ice Giants; That he was defeated by Odin thousands of years ago, after the battle ended; The All-father found the baby Loki among the remains of the castle. Out of mercy, and as a tribute to a worthy enemy, he decided to take him as his adopted son and raise him among the Asgardians along with his biological son Thor.

Part of Loki's resentment towards his adoptive brother was due to the preferential treatment that Odin and the population of Asgard gave Thor since being a warrior race for them was more important the bravery and physical strength, while the magic and witchcraft that were the things he stood out were not so important

When Thor grew up he had to go through several tests to get the Mjölnir hammer. Loki tried to make him fail, to get the chance to get him, but Thor finally triumphed.

Henceforth, Loki strives to destroy or humiliate Thor, or to rule Asgard.

Doctor Doom takes command of the Destroyer Armor. Thor has to convince the team to trust the one person who may be able to stop him: Loki.

Thanks to Loki's manipulations, Hulk and Thor are tricked into a battle and transported to Valhalla to find out who is the strongest once and for all. But under Hela's rule, only the loser of their contest may return to Planet Earth while the winner will become her consort and champion. While this is happening, Loki uses Hela's horn to unleash an army of skeletons to invade Earth.

Back to the Learning Hall[]

Thor is called into returning to Asgard as a guest to Asgard's Hall of Learning for the Learning Games as Hulk and Hawkeye follow him. The visions of Loki lure Thor, Hulk and Hawkeye into the chambers of the Learning Games where failure is a one-way portal to Valhalla. Meanwhile, earthquakes occur on Earth as the result of Earth and Asgard being pulled towards each other by the Space Gem which is in Loki's possession.

A Friend in Need[]

Come From Another Universe[]

All Things Must End[]

As the Asgardian God of Mischief, Loki is cunning, manipulative, deceptive, and a trickster by nature. He is extremely arrogant, and thinks himself above others and superior to all, thus making him feel as if he is destined to rule the world. 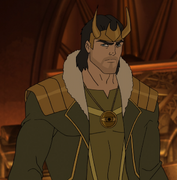 He is the leader of the new Cabal.

He is his paternal adoptive brother. Their relationship varies between series, in Avengers revealed that their battle with him did not end until none of them died; However, in secret wars they cooperate more with each other and seem to get along a little better.