Marvel Animated Universe Wiki
Register
Don't have an account?
Sign In
Advertisement
in: Templates, Characters, A to Z,
and 6 more

Leader and Founding Member of the Guardians of the Galaxy
Member of the Ravagers (formerly)
Prince of Spartax (temporarily, formerly)

Guardians of the Galaxy (Ultimate Spider-Man)

Peter Quill a.k.a. Starlord is the leader of the Guardians of the Galaxy.

Peter Quill, alias Star-Lord, was born in 1980 and is a half earthling half-alien. Sometime after the death of his mother, Peter was abducted by the Ravagers under his father's request to train him to be a thief and bring the boy to him when he was ready. Peter was instead taken and raised as one of their own since they lied to J'son that he had died along with Meredith Quill.

The events that led Peter and his soon to be friends coming together are similar to their Earth-199999 counterparts, by saving the galaxy from Ronan the Accuser who has perished as a result.

Search for the Cosmic Seed[]

Quill discovers an artifact called the CryptoCube that leads them on a mission to finding the Cosmic Seed as well as uncover the truth about his father that he has been avoiding all his life.

It's a Wonderful Smash[]

On Christmas, the Agents of S.M.A.S.H. and the Guardians of the Galaxy must break free from a simulated paradise created by the Collector and reclaim the Orb of Truth which is needed as part of a peace meeting between the Kree and the Shi'ar.

The Return of the Guardians of the Galaxy[]

Universal Translator: Quill was given a translator ear piece by Yondu that allows him to understand and speak various alien languages.

Cosmic Mix Vol. 1: A mix tape of his mother's favorite songs. One of the only things he has to remember her and the planet Earth by.

Jet Boot Attachments: Quill has small jets that he attaches to his boots. The jets can facilitate an increase in forward movement, and can also be used to achieve directional control during a space walk. 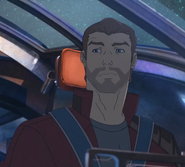 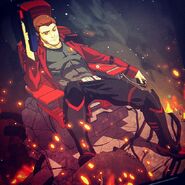