Samuel Alexander, also known as Nova, is a super-hero with cosmic-energy abilities. Ever since being inducted into the Nova Corps, Sam has developed quite the cocky attitude. He believes himself to be a natural leader, despite not seeing the limitations of his powers and his "fight now, talk later" strategy, which ends up, not being the best choice.

I should thank you Titus, sometimes I forget what I'm capable of, what I was destined to be. And just so that we're both perfectly clear, you will never take this helmet from me.

Sam Alexander grew up hearing stories from his father about his adventures in space as a Nova until he mysteriously went missing. One day, Sam arrived home to find his dad's old Black Nova helmet (that was sent there due to Adam Warlock) and upon wearing, a message from his father warning him not to find him, yet Sam ignored it and made it his mission to find him. Sam Alexander, alias Nova, received his powers from the Nova Force, which gave him the ability to channel through his helmet. These powers include flight, enhanced durability, and the ability to absorb and release pulses of energy. However, Sam did not know the extent of his powers, let alone how they work at this point.

He was one of the young superheroes recruited by S.H.I.E.L.D. to join the Training Program along with White Tiger (Ava Ayala), Iron Fist (Danny Rand), Power Man (Luke Cage), and Deadpool (Wade Wilson).

When Spider-Man was fighting the drones during a test on the S.H.I.E.L.D. Helicarrier, he quickly expressed his opinion albeit a bit arrogantly. When he and the rest of the team saved Spider-Man from his own inexperience of the Spider-Cycle, him and the Web-Slinger were already on bad terms, with Spider-Man calling him "Captain Bucket-Head". Later the team was sent to help the Web-Slinger fight the Frightful Four. After the fight, Spider-Man accepted the team. Sam along with the rest of the team, were enrolled into Peter (Spider-Man)'s high school.

Sam sat at Peter's table, all the while creating a mashed potato statue of Principal Coulson's head, to which Peter didn't react so well. Soon after, the two, along with the rest of the team were sent to the Helicarrier after school via a secret S.H.I.E.L.D. passage in a classroom while disguised as being in detention.

After being assigned a training mission by Fury, Nova and Spider-Man immediately began destroying and dismantling the training drones, tieing on the number of drones killed. However, it was revealed that the test was to get past the drones without harming them. As punishment for their failures, the entire team was ordered to clean up the parts of the broken drones. After finishing up, Spider-Man rudely showed off how many villains he captured, causing White Tiger to come up with an idea; if they could capture a villain on S.H.I.E.L.D.'s top wanted list, they would get more respect. After a brief argument with Spider-Man on whom to get, Sam suggested they catch Dr. Doom, to which the team agreed to.

Once arriving at Latveria however, Dr. Doom proved to be more than a match for the entire team. When he was finally defeated and taken to the Helicarrier, Spider-Man and Nova fought over who was the best. However, instead of respect, the only the thing the team got was Fury's temper and an attack by the now-revealed group of Doombots.

Sam, Ava, Luke and Danny were disrupting Peter's life and his friendship with Harry as they dragged him away with no explanation, Mary Jane told Peter to fix things with Harry by inviting Danny, Ava, Luke and Sam to Harry's party. A strange black symbiote attacked the party taking over Flash before bonding to Nova. Power Man tried to free Nova, and managed to do it, but was bonded to him now. After Cage knocked out both Iron Fist and White Tiger, Spider-Man used electro-webs to attack him, successfully causing damage, but still, it didn't de-bond Cage. After saving the guests who were in the street from a falling ventilator, Spider-Man returned to the rooftop, where Iron Fist freed Power Man, but after dodging its many attempts, he wass finally attached to the symbiote. It took over the team one by one, but eventually they were able to destroy the creature.

Flight of the Iron Spider[]

Sam and the team were fighting the Living Laser, but were helped by the Iron Avenger, Iron Man. He took an interest in Spider-Man and built him his own armor. He could not control his armor and disrupted all the team's missions causing damage along the way. The team confronted him after he was possessed by the Laser, that he was better without it, working together they sent the Living Laser to an alternate dimension.

Nova and the team were transformed into miniature child like versions of themselves by Loki. They were taken to the Helicarrier and tests were performed on them. Nick Fury with no other options was forced to put the team in D.A.Y.C.A.R.E., and monitored by Nanny Bots, with Agent Coulson's face. There they met another little person by with snot coming out of his nose. The boy was revealed to by Loki out for revenge, they were rescued by Thor who had also been transformed into a child as well. The team escaped D.A.Y.C.A.R.E. only to be attacked by the Destroyer armor. Nick Fury ordered the team to leave in a Quinjet, which was destroyed and the team was forced to parachute to a rooftop. Loki the possessed the Destroyer as the battle lead to a nearby toy store. They were able to retrieve the Norn Stone, and with Loki released from the Armor they transformed him to a childlike form and returned themselves back to normal.

Return of the Sinister Six[]

By the time Nick Fury was missing during Doctor Octopus and Hydra's attack on SHIELD, Nova and his allies are captured and about to be brainwashed by Hydra, however, Agent Venom and Iron Spider, due to having a Spider-Sense were not affected by Hydra's control. In the perfect timing, Spider-Man brought his new ally he found, Scarlet Spider, saving Agent Venom and Iron Spider first to cure all Goblin serum infused Hydra agents with an anti-Goblin vaccine provided by Norman Osborn, then saving their allies, before going to Hydra Island to confront Ock and Arnim Zola.

Nova soon got a duty from Spider-Man (whom now had no choice to take Fury's roles in his absence) to find Nick Fury's location.

As Nova finds out that Fury was kidnapped by the remaining Hydra members led by Crossbones in the lost city belonging to the ancient Inhumans, Nova stumbled upon the sacred Inhuman box and retreated to SHIELD Triskelion for Spider-Man to save Nick Fury, accompanied by Triton, despite entering the lost city is forbidden for non-Inhumans like Spider-Man, even the current Inhumans like Triton may receive punishment by entering the ancient Inhumans' lost city.

Sam stated that he hasn't had a family around for a long time, and he is close to Aunt May because she reminds him what it's like to have a family. She believes in Peter, and Sam counts him lucky for having someone like Aunt May there for him. He is also a good dish-washer as shown in Peter Parker's house after his home, the Hellicarrier, crashed.

Later, it is also revealed that Nova lived in outer-space with his old team, the Guardians of the Galaxy, with his mentor, Rocket Racoon. However, why he came to Earth remains a mystery: it is most probable he came because Earth is one of the planets in most need of protection.

Sam Alexander aka Nova is a short teenage Hispanic male who has black hair and green eyes. As a civilian, he wears a light blue shirt with a white shirt.

He wears a Centurion Nova Corps costume which comes with a gold helmet that covers the upper part of the face, with a big red star on the front and white eyes. He wears a black suit, with golden buttons on the suit with gloves. In Season 3, after unlocking all of his powers, he now appears more like his mainstream counterpart with a black helmet.

Throughout the series, Spider-Man calls him 'bucket- head' because of the peculiar shape of his helmet.

In Man-Wolf, it was shown that Nova can fly in space without a space-suit.

The hyperactive loose cannon of the team. He is far more enthusiastic and immature than Spider-Man, Sam’s eagerness can be a blessing and a curse for him and the rest of his team. His personality constantly clashes with Spider-Man's as they compete for both bragging rights, and the right to lead the team. Nova doesn't know the true limits of his powers. Sam always feels that he has something to prove and is very cocky. Sam, despite being boastful and sarcastic, has leporiphobia, the fear of rabbits. His massive ego causes him to be the bane of all of his teammates, especially during battles. He spends most of his time during fights trying to show off how cool he is, clicking photos on his mobile, rather than actually helping his teammates to win the fight. On very few occasions, he is shown to know the difference between a joke and something serious. He also respects aunt may the most and likes to spend time with her like in the episode "Second Chance Hero" episode he was with Aunt May trying her dress and also in "The Lizard" he was helping her exercise in the basement and in the "Guardians of the Galaxy" they gave him a lot protocol and when Spider-Man asked them they were giving protocol so they said "what's not to love him."

Before the coming of Spider-Man, he used to lead the team consisting of him, Power Man, White Tiger, and Iron Fist.

Halberd: A Spear battleaxe forged by Eitri made from Uru metal. It's difficult to balance so it requires a steady hand. Wielding it requires Nova to be patient, picking for the right moment to unleash his power. The halberd remains in Eitri's possession should he ever need for it again.

Jet-Pack (despite the fact that he can fly)

Espionage Gadgets: S.H.I.E.L.D. tech and equipment used for spy and undercover work. Nova and his team used these gadgets to sneak into Brighton Beach High. 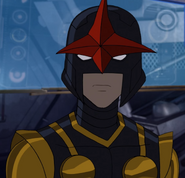