Marvel Animated Universe Wiki
Register
Don't have an account?
Sign In
Advertisement
in: Pages with reference errors, Templates, A to Z,
and 9 more

Sam Wilson is a promising genius with both technology and science and secretly worked with Tony Stark on technological advances and special armors.[1] When Iron Man, presuming Captain America had been killed by the Red Skull, activated the Avengers Protocol to reassemble the Avengers, Sam responded to the call in the Project Red-wing armor. Taking the identity "Falcon," Sam Wilson joined the Avengers and was subsequently fired from S.H.I.E.L.D. by Nick Fury.[1] He rejoined S.H.I.E.L.D. after the Avengers split into two teams, but resigned after Ultron was defeated.

Sam Wilson served as a member of S.H.I.E.L.D. and often trained. However, during one of his training sessions where he was scolded so viciously by Nick Fury, he received the Avengers Protocol from Iron Man. After being asked by Nick Fury where he was going, Sam told him that he was heading into the big leagues. However, Fury questioned what could be bigger than S.H.I.E.L.D. as he left. Upon entering Stark Tower, Sam was greeted by J.A.R.V.I.S., whom he expressed his interest in becoming a member of the Avengers too. Though JARVIS told him that Iron Man had suggested that he wear the War Machine armor, but Sam insisted on wearing the Red-Wing suit later called Falcon Armor. In the meantime, the other responders of the Avengers Protocol went with Iron Man to fight Red Skull at the Arctic Base. Sam learned of their location and made his way to it.

He met up with the other Avengers after taking down agents of HYDRA and soon found himself on the receiving end of suspicion from Hawkeye. After having his name cleared by Black Widow, he joined the Avengers in aiding Iron Man and Captain America, the latter having had his mind placed in Red Skull's body and fighting his enemy in his own. After successfully taking down Red Skull and having the latter placed in the machine he used to switch bodies with Captain America, Falcon was given the permission of Captain America to switch their bodies back and soon thanked by him. After M.O.D.O.K. woke up from his unconsciousness and attacked Iron Man, Falcon participated in trying to get through the force field with the other Avengers as M.O.D.O.K. removed Iron Man's armor and arc-reactor, placing it on Red Skull and causing the latter to dub himself the Iron Skull.[1]

The Avengers battle Space Phantoms, extra-dimensional beings who can replicate them right down to cellular level. The creatures replace them one by trapping them in Limbo. But Sam is able to save the team, and working together, they take down the alien invaders.

The Avengers battle Doctor Doom as he uses the Asgardian weapon Cudgel to release the Midgard Serpent, with hopes of using it to conquer the globe. The creature is too powerful, and would continue to grow until it consumes the Earth. After a battle with the Avengers, he and the creature are banished to the Realm Below using the extra-dimensional portal used by Ulik.

The Avengers battle Dracula, who had kidnapped Black Widow and turned her into a Vampire. They travel to Transylvania and confront him at Castle Dracula. He reveals that he was an ally of Captain America during World War II, working together to defeat the invading Hydra forces. He wants the Super-Soldier Serum in Cap's blood, which will allow him and his subject the ability to go out in the sunlight. During the fight, he drinks the Hulk's blood, absorbing his powers, and turning the Hulk into a Vampire. However, the Hulk's gamma cells act like tiny suns, and he burns away the infection, which also weakens Dracula. In his defeat, his minions drag him underground to safety.

He was captured along the other heroes by the Collector but was soon freed by She-Hulk and Skaar.

Justin Hammer sends a video message to the Avengers, inviting them to come to his company, so he can show off his new invention: The Super-Adaptoid. The Avengers make quick work of the Adaptoid, prompting Hammer to rebuild the robot and send it to Avengers Tower to attack the team. After a lengthy battle, Captain America and the Avengers manage to destroy the Super-Adaptoid again.

After moving into Avengers Tower, Falcon tried flying there with the cookies that his mother had made for the team, only to be encountered by Iron Man who tried messing with him.[2]

On his day off from working for the Avengers, Falcon went with Hawkeye to a carnival where he became annoyed by his constant winning of stuffed bears as prices for having succeeded in the games there, leaving him be before Hawkeye was confronted by Black Widow who informed him of Molecule Man returning. Falcon overheard Hawkeye, who as being told by Black Widow not to inform Iron Man, swear that he would be angry, leading Falcon to question the pair on what he meant. When they failed to convince him that they were discussing a "surprise poker party", Falcon left the two alone.

Hawkeye and Black Widow went after Molecule Kid and despite their efforts, were not only unable to retrieve his wand from him without the interference of the other Avengers as they intended thanks to Captain America coming to save the pair after they were stopped in their tracks by Molecule Kid who trapped them in "honey" but also had to deal with the M.O.D.O.K.-controlled Super-Adaptoid intervening as well. Falcon came to their assistance, flying over Hawkeye and Black Widow as they argued and called for one of the pair to free Captain America, who had been caught in a bent pole made to bend by Molecule Kid's wand. Falcon gave his all against the Super-Adaptoid but found it difficult to significantly harm it, prompting the other Avengers to assist him until Iron Man arrived and broke the wand when trying to get it out of the hands of Molecule Kid.

The wand's shattering sent the group into an alternate dimension, which Falcon was caught into. There, he assists in attempting to stop Super-Adaptoid from harming Molecule Kid and the others by holding him down as Iron Man, Hawkeye and Black Widow convinced him to assist them in using the wand to return things to normal. Once this was done, the group returned to their normal dimension.[3]

When the Avengers faced against the newly formed Cabal, they were trapped and immobilized on the leaders ship, the team was then dispersed across time and space. After the Avengers disappeared, Sam ended up in a few years into the future in which Kang had deprived people of New York of technology but was trying to save the Earth from a Singularity caused by his excessive time traveling. Without Tony Stark to help him, he decided to go for the second brightest mind on Earth after Stark's Falcon.

Samuel got a new suit and spent next few years in the future maturing and learning new combat skills under Kang's tutelage and fought against anyone who possessed Kang like old Red Hulk. Falcon eventually met with Wasp and Vision who came to this time in hopes of finding him. Sam brought Vision to Kang's castle in need of his technological abilities to stop the singularity, they nearly failed when Wasp and Red Hulk interfered but were able to work together to succeed in their mission. However Kang revealed that he plans to used the energy from the singularity that would allow him to time travel without consequences, Sam tries to appeal to his former teacher but rejected his offer, little did he know Sam had already placed tech dampeners as a contingency for his betrayal. Together Falcon, Vision, Wasp and Red Hulk defeated Kang and freed the people of that time period from his conquest, soon Sam was then brought back to his original time with Vision and Wasp.

Upon all the Avengers safely return home, they found their world now covered in ice under the rule of Loki.

Being the newest member of the Avengers, Falcon's personality is an extension of his inexperience. When he first joined the Avengers, Falcon was a jittery, extremely self-conscious, and oblivious, although an adept, young superhero, who longed to fit in with the member of the team and eager to please.[2] Set on making a good impression, Falcon would go out of his way to make sure the Avengers were comfortable; bringing homemade cookies made by his mother as a concession to a team meeting.[2]

He can occasionally lose focus when impressed by something but can regain his concentration when corrected. An avid fan of all his teammates, especially his mentor Tony Stark, Falcon oftentimes came off as a glorified admirer rather than an actual asset to the Avengers. He would also sometimes expression grandiose delusions when commanded by his older teammates, adding more to his anxious personality. Mending Iron Man after the loss of his Arc reactor, both he and Captain America expressed their gratitude towards Falcon. Readily starstruck, he asked them both to reiterate their words of praise back into his cellphone, wishing to make it his ringtone.[4] Falcon also showed an apparent fear of the Hulk, as many do.[2]

For all his inexperience, Falcon is enthusiastic and determined to make up for his ignorance.[4] Being gifted in the intellectual arts, he is inspired when solving acts of heroism using his head more than his powers.[4] His skill set was apparently infamous within the ranks of S.H.I.E.L.D. training class; when Iron Man set out the call, activating the Avengers Protocol, re-gathering the team so that they can avenge Captain America, Falcon was in the middle of training with Nick Fury when the call came and abandons his training session, though not before Nick Fury put his reputation into question due to his shift in behavior.[1]

Overly Modest: Sam's most notable weakness would have to be his over sense of modesty, at times doubting his own skills or that he's anything special, being surprised at what he's capable of. Though over time, Sam has grown to have more confident in himself and his capabilities.

Iron Man is Falcon's mentor and team leader. Sam respects and admires Tony, since he is the one who convinced him to become an Avenger. In Exodus, Tony is deeply shaken for having put Sam's life at risk and stays behind with him while the other Avengers fight Red Skull. When Sam awakes determined to head to battle, Tony tries to stop him. Sam expresses how much Tony has impacted his life and his words help Iron Man rebuild his confidence in his own leadership.

Altough Sam and Clint don't start their friendship with the right foot, they learn to respect each other in Downgraded.

Darlene is Falcon's mother. She usually bakes cookies or cakes for his fellow Avengers.

In the comics, the Falcon was the second black superhero created (the first was the Black Panther), and made his debut in Captain America #117. His backstory was largely different from that of the animated shows, as for four decades it was believed he was a sleeper agent pawn of the Red Skull with a past as a criminal (although this would all eventually be revealed to be false). Also, the Falcon had a telepathic link with his pet falcon, Redwing, which he would later hone to other birds. This ability is still being explored

The show's iteration of Falcon takes hints of the Ultimate Universe's Sam Wilson who first appears during Ultimate Nightmare #1. In the Ultimateverse, Sam's a certified genius in the fields of engineering, mathematics and nanorobotics who both doubles as an Agent of S.H.I.E.L.D. over being a member of the Ultimates or any Reserve teams and an adventuring scientist with a Microbot made wing harness of his own design. 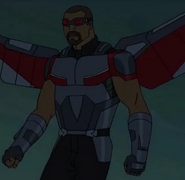 Falcon in his new suit 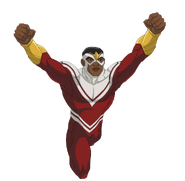 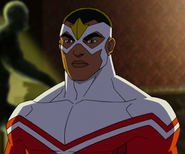