Ant-Man (real name Scott Lang), is a size-altering superhero, a member of the Avengers and works alongside Iron Man.

Scott Lang was a electrician, technician and a scientist-in-training who worked alongside fellow scientist Hank Pym, who was also the superhero Ant-Man. Hank was a member of the Avengers, but after they had disbanded, Hank decided to retire as Ant-Man, and passed on the Pym Particle technology to Scott. Scott had tried to improve and upgrade the Ant-Man suit so he could be a better Ant-Man, but couldn't get funding for his experiments. As he had been a thief at one point in his life, Scott began selling his weapons to super-villains for cash mentioned in Spectrums among them being Whirlwind and the Circus of Crime, whom he worked alongside. However, while Scott used his payments to fund and complete his experiments, he realized his partners were super-villains, and that they had stolen money from his town. While trying to stop them, Scott caused an arrow to explode in Trickshot's face, who unbeknownst to him was Clint Barton, the future Hawkeye. This, along with betraying the Circus, caused Barton to hold a grudge against Scott, which was later resolved.

Scott Lang aka Ant-Man worked with Iron Man and Falcon to stop the unstable Pym Particles from getting out of Avengers Tower at the time when Falcon's mother Darlene came to visit her son.

A.I.M. had stolen a cluster of Pym Particles from Ant-Man. Upon hearing what happened to Avengers Tower during the fight with Ultron, Ant-Man allows Iron Man, Hawkeye and Thor to use his lab within an anthill. His lab is shown to have an A.I. named J.O.E.Y. (his version of J.A.R.V.I.S.). His flying ant Euclid has taken a liking to Hawkeye and Thor tests his strength against the ants Newton and Tesla. Ant-Man helps out Iron Man, Hawkeye and Thor to battle M.O.D.O.K. when M.O.D.O.K. uses the Pym Particles to grow out of the cybernetics to keep from being taken over by Ultron. With advice from Ant-Man, Iron Man was able to remove the Pym Particles from M.O.D.O.K.'s body during an attack on an amusement park. After M.O.D.O.K. is left tied up for S.H.I.E.L.D., Ant-Man joins up with Iron Man so that there can be another genius for the Avengers.

Ant-Man helps the Avengers' fight against Ultron. He manages to shrink an Ultron-controlled Falcon and place in a test tube. Upon bringing the Ultron-controlled Falcon to his lab, he and J.O.E.Y. analyzed the nano-virus in Falcon to find an antidote. Upon finding it with help from Falcon, Ant-Man creates the cure for the nano-virus to use on Falcon as he has Ultron's scattered conscious return to Ultron. After Ultron was defeated, Captain America and Iron Man invite Ant-Man into the Avengers.

Ant-Man helps the Avengers into subduing Fin Fang Foom in Washington DC via shrinking. Hawkeye has some trust issues ever with Ant-Man since Scott betrayed the Circus of Crime back when Hawkeye was operating as Trickshot. In order to see if Ant-Man is worthy to be one of the Avengers, Captain America has Hawkeye oversee the initiation training on Monster Island. Both of them eventually work together to save Captain America from the Red Skull using Dormammu's powers as protection from Thanos. With unlikely help from Fin Fang Foom, Ant-Man was key in helping the other Avengers. After Red Skull is in S.H.I.E.L.D. custody, Hawkeye officially welcomes Ant-Man into the Avengers.

It's revealed that Ant-man sold various tech upgrades to villains. Among them included Dr. Spectrum of the Squadron Supreme, who he befriended.

The Revenge of Arnim Zola[]

While freeing classmates, Spider-Man is captured by Arnim Zola and absorbed into his body. The freed friends must fight Arnim Zola to help Spider-Man escape the madman.

Sometime prior to the events of "Adapting to Change" during a meeting at the Avengers Tower Black Widow mentioned that we beat all the major threats in the world the same reason why Ant-Man went solo.

Since leaving the Avengers, Scott became the insider for the movie: Human Ant and the Revengers. However the former prop master Elias Starr, better known as Egghead, attacked the site.

In the Civil War plot-line[]

Ant-Man is a strictly scientific person who tends to over-worry. Scott can also be overly sarcastic as well. He is still though is willing to sacrifice his life to save others, making him a true hero among the Avengers. He and Hawkeye disliked each other, though they make up in The New Guy, where we learn that Scott betrayed the Circus of Crime when Clint was still a member and the latter took an arrow to the face after Ant-Man discovered they were criminals, not knowing Trickshot and Hawkeye were the same person. He ran with the money, although he gave it back later, and saved his hometown.

Ant-Man respects Tony Stark as his team leader and works together with him several times.

As seen beginning their own rivalry on One Little Thing, Hawkeye and Ant-Man dislike each other. It was revealed in The New Guy that Hawkeye, back when he was still with the Circus of Crime as Trickshot, took an exploding arrow to his face courtesy of Ant-Man when he learned they were criminals and betrayed them. Hawkeye has held a serious grudge against him, leading Ant-Man to dislike him due to constantly being on his bad side. Hawkeye doesn't like having to work with Ant-Man and seems the most displeased at having him joining the Avengers at the end of The Ultron Outbreak. Ant-Man doesn't like Clint either and has no problem leaving him at the mercy of one of his ants that seemed to like Hawkeye in Small Time Heroes. They do makeup in The New Guy when Clint learns the reason why Ant-Man betrayed the Circus and Scott realized that Trickshot was Hawkeye.

Scott has a deep respect for Captain America.

Scott Lang is a genius scientist in the fields of biochemistry and nuclear sciences. 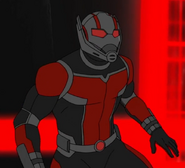 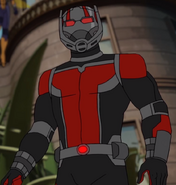 Ant-Man without his helmet