The Sinister Seven are a minor antagonistic faction in Ultimate Spider-Man.

It was a supervillain team that Doctor Octopus founded, that is typically composed of seven of Spider-Man and S.H.I.E.L.D.'s formidable foes to destroy Spider-Man, his teams and S.H.I.E.L.D. once and for all. After Doc Ock joined Hydra, he started creating the team by secretly pretending to try and gather six villains while placing his seventh member, Scarlet Spider, as his spy in S.H.I.E.L.D. and to free himself from Hydra for their mistreatment of him. Doc Ock struggled many times to complete the group due to Spider-Man and the Web-Warriors intervening with it before finally succeeding in completing the group. After having the group distract the New Warriors and Web-Warriors, Doc Ock succeeded with gaining the Anti-Hydra Weapon and Scarlet Spider betrayed Spider-Man and the teams by revealing Spider-Man's identity to Doc Ock and getting the key to the Anti-Hydra weapon while Doc Ock used the weapon to not only bring Hydra Island back but also turn it into Octopus Island. However, after finding out that he was seen as a servant, Scarlet Spider defected and stopped Doc Ock's plan by crashing Octopus Island into the ocean. However, Doc Ock escaped but was captured by Hydra for his failure.

In the season premire "Hyrda Attacks", Spider-Man, Iron Spider, and Agent Venom pursue Doctor Octopus, and defeat and detain him. However, this is actually part of Ock's plan, as he has a miniture Octobot break into Swarm's cell, and bonds to his nanites, causing him to explode, sending the Octobot nanites all over the Tri-Carrier, transforming it into Hyrda Island. Doctor Octopus is reconfigured into a new life-support armor (resembling his Ends of the Earth design) and reveals that he formed an alliance with Arnim Zola and HYDRA, and has created an army of Goblin Soldiers (Goblin-mutated versions of his Spider-Soldiers). Doc Ock then releases the supervillains aboard the Tri-Carrier (Batroc the Leaper, Boomerang, and Kraven the Hunter among them). He informs them he intends to reform the Sinister Six, and offers that the first one to capture Spider-Man will be the first to join. Kraven takes up this offer, and he pursues Spider-Man and his aggressive partner Scarlet Spider. Ock also intends to transform Norman Osborn back into the Green Goblin to lead his Goblin Army, but after Osborn reveals he has inoculated himself with a cure that makes him immune to the serum, he attempts to inject Harry Osborn instead. However, Spider-Man and Scarlet Spider's timely interference saves the Osborns. After the spider-related heroes manage to send Zola and Hydra Island flying into space, Doc Ock escapes and sets out to find the former members of the team to reinstate it.

Spider-Man and his Web-Warriors have been systematically eliminating various supervillains to thin out Ock's number of Sinister Six candidates.

Doctor Octopus has assembled his Sinister Six with Kraven the Hunter, Ultimate Green Goblin, Rhino, Hydro-Man, and Electro where they attack the Triskelion. After most of the Sinister Six was defeated by the S.H.I.E.L.D. Academy, Doctor Octopus revealed to Spider-Man that he actually formed the Sinister Seven when his spy on the inside is revealed to be Scarlet Spider (not Rhino) who defeats and unmasks Spider-Man.

Scarlet is ordered to retrieve the key to Dr. Connors Anti-Hydra weapon from Aunt May's house. After a fight Doc Oc was able to use to turn Hydra Island into Octopus Island. Through the efforts of Spider-Man and Doc Ock's callousness Scarlet Spider turned against him, due his respect to May for owing his debt on made him himself and learned Doc Ock only sees Scarlet as a tool, should he failed. Octopus Island was rendered incapable of flight and was going to crash into New York. Scarlet Spider gave his life to save the city.

Recruits For The Sinister Seven[]

Season 4: Ultimate Spider-Man vs The Sinister 6[] 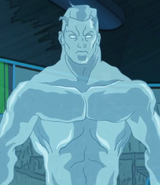 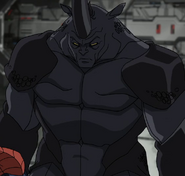 Background in other media[]