Marvel Animated Universe Wiki
Register
Don't have an account?
Sign In
Advertisement
in: Templates, A to Z, Characters,
and 10 more

Steve Rogers is a World War II veteran, superhero, and a founding member and second leader of the Avengers. Born in Brooklyn, New York City, the young Rogers had suffered from numerous health problems, and upon America's entry into World War II, was rejected from military service despite several attempts to enlist. Determined to serve, he ultimately volunteered for the top-secret Super Soldier program, and the frail Rogers was then enhanced to the peak of human perfection. Rogers soon joined the war effort and was given the new moniker of Captain America.

There's another kind of power. The power to stand up for what's right. To fight for people who can't fight for themselves.

Steve Rogers, alias Captain America, was born on Thursday, July 4, 1918, as small weakly child. Because of his nonathletic body, he was hardly ever pick by the other kids to play sports games like baseball, so when he wrote to Santa, rather than toys he asked for a chance to play. That same year Steve got a brand new bat and ball, items his family couldn't afford but still his ticket into the game, while despite being awful at it he still loved every second of it. Steve had a close relationship with his father as they would often go fishing together, he passed away before Steve could enlist for the upcoming war.

Captain America became a superhero during World War II. During this time, he also formed an antagonistic relationship with the Red Skull. The two fought in many battles against each other and even continued their hatred into modern times.

During a routine day as a hero, Captain America fought the Red Skull. While engaging his enemy, he told his longtime adversary that he was sad for him to come back from the dead just to merely be defeated again. However, his enemy soon vaporized him, seemingly killing the hero and causing Iron Man to attack him with blind fury. Though he gave it his all, Iron Man was unable to stop Red Skull, as he teleported away from him with M.O.D.O.K. This caused Iron Man to reassemble the Avengers and come to attack Red Skull and defeat him. In actuality, Captain America had not been killed, instead of being transferred/Kidnapped and taken to the villain's base by the Red skull and having his body switched with Red Skull's diseased one.

Though he started to initially fell faint and even told Iron Man that he had felt avenged him, Captain America and Iron Man were able to hold off their aggressor until the other Avengers arrived. As the attacking body-swapped Red Skull told him that their conflict would end now, Captain America grabbed him and told him that he thought he was right, reasoning that he had scratched up his body enough and told Falcon to finish it as he pressed the body-swapping machine main button and caused the two to return to their normal bodies. Upon returning to his, Captain America said it was much better and thanked Falcon before thanking the entire team and would next participate in trying to save Iron Man from M.O.D.O.K., who used his powers to strip away his arc-reactor and armor and give it to Red Skull.[1]

A meteor began to descend to Earth, the Avengers moving in to stop it from destroying the planet. Captain America assist Hawkeye in wiping out large chunks before Iron Man scanned the "Earth killer", an even larger rock that was coming toward the planet. Captain America watched the combined teamwork of Iron Man, Hulk, and Thor as they failed to destroy it, though it was obliterated by Hyperion who revealed himself to the group afterward, Hyperion being pointed out by Black Widow and Captain America quickly deducing that he was not from around there. The group did an examination on Hyperion after this, Hawkeye asking how his aim was and Captain America calling it accurate since he had been able to destroy an entire meteor. After Black Widow questioned if the group had taken the time to consider if he wanted to join the team, Captain America answered that some people hear the call and are compelled to assist.[2]

Captain America intervened in Black Widow and Hawkeye's pursuit of Molecule Kid when the two became stuck in what appeared to be honey, the result of Molecule Kid using his powers to allow him to escape them. He pulled Black Widow out of it and while doing the same for Hawkeye, questioned why she had not let the rest of the team know about the mission. In learning that she had been assigned the mission by Nick Fury with the explicit orders to not tell Iron Man, he questioned if S.H.I.E.L.D. meant more to her than the Avengers, also wondering how the pair could have so much difficulty catching a child and pointing out that he was getting away while the two argued with each other, though he did agree with them that Iron Man should not be told. Captain America tried to convince Molecule Kid off giving up the wand while Black Widow and Hawkeye held of the M.O.D.O.K.-controlled, Super Adaptoid, attempting to convince Molecule Kid that his wand would be better suited in hands of adults only for Molecule Kid to trap him with the use of a street light. After being freed, he assists in the fight against Super-Adaptoid and was witness to the conversion of the city caused by the split of the wand in half, thanks to Iron Man hitting it after it was taken from him by Molecule Kid following his arrival on the scene.[3]

Steve is one of the most worthy beings in the universe. He believes all deserve a second chance, and will easily give up his life to protect the innocent, and protected. Possessing a strong moral code, Steve only fights when necessary, and does not judge anyone, despite their character. He is courageous and will continue to fight even when he knows he cannot win. Steve is a loyal, brave, selfless, and wise man. He is also a good leader.

Steve and Tony seem to have a very strong relationship, notable for the constant bickering and teasing, in which they keep it to a professional level but not without dropping several hints throughout the seasons that heavily imply that there might be more to the relationship than just friendship. In The Avengers Protocol - Part 1, Iron Man reassembles the team after the presumamble death of Captain America, but not before attacking Red Skull and proving him that "the Iron Man has a heart". Upon learning that Captain America is alive, Tony foolishly abandons his team and rushes to Steve's aid. In Bring on the Bad Guys, Tony choses to save Steve from falling to his death, letting the Red Skull get away. When they're not with their team, they can frequently be seen alone with each other. Their relationship, however, was strained in Crack in the System where Tony knew Ultron was and kept it a secret from the other Avengers. When it was revealed at the end of the episode Steve tells him that a real leader doesn't act like the way Tony did, nor did Tony's father, and because of his actions, Steve quit the Avengers. In Avengers Disassembled Steve returns but at the end leaves again (along with Black Widow, Falcon, and Hulk) because of the way Tony leads the Avengers. In The Ultron Outbreak, Steve and Tony chose to put their differences aside and teamed up to defeat Ultron.

Captain America and Falcon are good friends, in The Avengers Protocol - Part 1 Sam was not wanting to knockout Captain America but realized that he and Red Skull switched bodies to keep Captain America's. It's been revealed in Ghosts Of The Past that Falcon and Captain America did missions together to save the world and took Captain America's side at the end of Avengers Disassembled. At the beginning of The Ultron Outbreak, The Avengers (Captain America, Iron Man, Thor, Black Widow, Ant-Man, Hulk and Hawkeye attacked Falcon as Ultron while Ant-Man was able to get up close in person and shrunk Falcon to help free him from Ultron's Virus.

Hawkeye enjoys to tease Steve in his relationship with Tony, as seen in several episodes such as In Deep and Exodus.

Steve Rogers and Bucky Barnes have been best friends since childhood. When Bucky was transformed into the Winter Soldier, Steve felt guilty and felt as if he had failed him.

Captain America and Black widow seem to have a certain level of trust in each other. In "Blood Feud" Rogers expressed great concern when she nearly became a full-fledged vampire. As seen in "Adapting to Change" she trusts him enough to recruit him on a covert S.H.I.E.L.D. mission. In "Saving Captain Rogers" she has shown a level of concern for him. 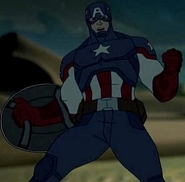 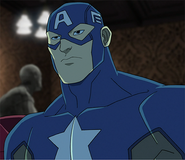 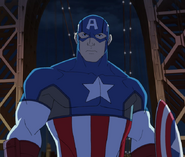 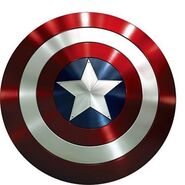 Captain America's look from the promo for Avengers: Ultron Revolution.

Captain America in his Stealth Suit. 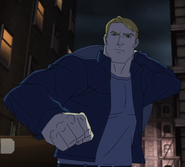