Marvel Animated Universe Wiki
Register
Don't have an account?
Sign In
Advertisement
in: Templates, A to Z, Avengers,
and 10 more

Thor Odinson is the Asgardian God of Thunder, superhero, and a member of the Avengers. Born on Asgard, Thor is the son of King Odin, and is next in line for the throne. He is the older stepbrother of Loki. He is also the primary wielder of Mjolnir.

Where I come from, some believe humanity to be fragile, weak. Yet I have dedicated my life to this planet because I believe in your strength and honor. I have never regretted my choice, and I do not regret it now. You are better than this.

At one point as a child, a young Thor and Loki met a time displaced Hulk and Leader, believing them to be dangerous Ogres who were attempting to take the berserker staff and brought them in for imprisonment on Asgard. The Leader tricked Hulk into holding a part of the staff causing him to go berserk and wreck Asgard, Thor and Loki faced against the enraged hulk to protect their father Odin who was unable to stop him. However Leader took his Gugnir to subdue Hulk and taking the position as the new All Father.

Hulk was able to convince Thor and Loki to rebel against the Leaders plans to enslave the Nine Realms, together they managed to defeat Leader and Odin resumes his position as the All Father

Years later, Thor became one of the greatest superheroes, and a member of the Avengers. His half-brother, Loki, tried many times to humiliate him and overthrow Odin as the ruler of Asgard.

Thor comes from the realm of Asgard and is the son of Odin and adoptive brother of Loki. At some point he joins and forms the Avengers prior to the series. Also prior the Avengers have fought Ultron and defeated him. It's unknown if it was after this defeat or not that the Avengers had disbanded.

Thor is considered by both Nick Fury and Spider-Man as one of the greatest superheroes ever.

Once, Loki sent Thor a trap, by sending a Frost Giant (who he was working with) to Earth, which battled the God of Thunder and a group of young heroes being trained by S.H.I.E.L.D. The battle ended with Thor touching a Norn Stone and being turned into a frog.

Thor returned to Asgard alongside the S.H.I.E.L.D. Trainees, and found it frozen and controlled by Loki, who was in the palace, trying to open a door to Odin's room, where he was under the Odinsleep, and kill him. "Throg" couldn't withstand that battle, even with the help of the young heroes, and had to teleport themselves away. They later found help with Eitri, who provided the heroes with weapons to defeat Loki. After he and the heroes could defeat Loki's Frost Giant minions, Spider-Man tricked Loki to turn Thor back to normal in order to kill him fairly, and was stopped by him, but he teleported away. In order to reward the young hero's courage, Thor gives them a two-headed goat.

After Captain America was vaporized by Red Skull, Iron Man activated the Avengers Protocol and called the team through a hologram device to a meeting. The heroes selected by Stark were Thor, Hawkeye, Hulk, Black Widow, and a S.H.I.E.L.D. trainee named Sam Wilson. As The Avengers flew to the HYDRA Base, in Antarctica and learned that Captain America was still alive and was only unreported by M.O.D.O.K. to undergo a body change with his mortal nemesis Red Skull. What ensured was a massive battle that ended up rescuing Captain America. After his defeat by the Avengers, Red Skull realized where the true power resided in the Avengers team and ordered M.O.D.O.K. attack and strip Tony of his Arc Reactor and armor. Now clad in his armor he called himself the Iron Skull. As Tony laid there dying, Tony asked Captain America for help.[1]

The team found the Quinjet blown to pieces. The only option was for them to all squeeze into the S.H.I.E.L.D. flying car. They rush him back to the Avengers mansion where Falcon hooks Tony up to machinery to restart his heart. M.O.D.O.K. use special nanobot with the ability to manipulate the Avengers to turn on each other. During a sparring session between the two, Thor and Hulk were infected by the nanobots. They all battled each other, with only Tony left uninfected. He cured his allies using a concentrated electromagnetic pulse. They found Red Skull trying to steal Tony's tech, who was stopped, but still had time to teleport away. It is then that Tony discovered the Mansion's reactor was about to blow. The team must work together to stop the explosion. They created a vortex shooting the explosive energy into the sky. The team then moved to Stark Tower where they set up home as now a official team.[2]

Thor, Spider-Man, and his team are transformed into children by Loki. The team escape D.A.Y.C.A.R.E. on the Helicarrier only to be attacked by the Destroyer armor. Nick Fury orders the team to leave in a Quinjet, which is destroyed, and they are forced to parachute to a rooftop. Loki possesses the Destroyer as the battle leads to a nearby toy store. They are able to retrieve the Norn Stone, and with Loki released from the Armor, they transform him to a childlike form and return themselves back to normal. For some reason, he calls Spider Man, "Man of Spiders."

Ghost of a Chance[]

The Avengers battle Space Phantoms, extra-dimensional beings who can replicate them right down to cellular level. The creatures replace them one by trapping them in Limbo. But thanks to Falcon he is able to save the team and working together the take down the alien invaders.

The Serpent of Doom[]

The Avengers battle Doctor Doom as he uses the Asgardian weapon Codgel to release the Midgard Serpent with hopes of using it to conquer the globe. The creature is too powerful and would continue to grow until it consumes the Earth. After a battle with the Avengers he and the creature are banished to the Realm Below using the extra-dimensional portal used by Ulik.

The Avengers battle Dracula who had kidnapped Black Widow and turned her into a Vampire. They travel to Transylvania and confront him at Castle Dracula. He reveals that he was an ally of Captain America during World War II, working together to defeat the invading HYDRA forces. He wants the Super-Soldier Serum in Cap's blood which will allow him and his subjects the ability to go out in the sunlight. During the fight he drinks the Hulk's blood absorbing his powers and turning the Hulk into a Vampire. However the Hulk gamma cells act like tiny suns and he burns away the infection, which also weakens Dracula. In his defeat his minions drag him underground to safety.

Justin Hammer sends a video message to the Avengers, inviting them to come to his company, so he can show off his new invention: The Super-Adaptoid. The Avengers make quick work of the Adaptoid, prompting Hammer to rebuild the robot and send it to Avengers Tower to attack the team. After a lengthy battle, Captain America and the Avengers manage to destroy the Super-Adaptoid again.

Thor is a proud and worthy warrior loving to fight for the right side of Earth. He feels it is his duty to protect the people of Earth from the threats that lurk all around the world. Thor is unquestionably a courageous and unselfish being, having said many times he will lay down his life for the innocent. Though he loves flying into battle and hammering opponents, it is revealed in the episode The Midgard Crisis that Thor withholds his full strength and power while fighting alongside the Avengers, even on beings such as the Hulk. This shows that he believes in honor, the way of the warrior, and many other things. He will let those feelings go, however, if he feels a being has wrongly used his or her power against innocence. Thor believes humans are not weak and hopeless like Odin, but fighting people who will never give up for good.

Hulk is Thor's teammate and rival. They are always arguing about who is physically stronger, and have competed in numerous of competitions to try to find out, almost always ending in a stalemate. Thor considers Hulk a brother, and gladly fights with him as the muscle of the Avengers. Thor is one of the few who understand the Hulk, which is probably why they get along so well.

Natasha and Thor are teammates and have had several episodes in which they bond a bit. The Mind Stone caused Thor to switch bodies with Black Widow for an entire fight with M.O.D.O.K. controlling the entire Tri-Carrier. Even in that form Thor is able to call upon and wield Mjolnir. In Widow's Run she and Thor tried to get rid of the Infinity Stones. When under the Stones control, she asks Thor to get rid of her by sending her away to the Dark Realm, even though his father's law forbids it. He eventually summons the portal to send her away, although he was quite reluctant to do so.

Hawkeye is also Thor's teammate and rival alongside Hulk. Though all three are rivals they can be friends when they need to be. In Back To The Learning Hall, Thor gets an invitation to return to Asgard and decides to go with Hawkeye and Hulk in tow. When they get to the Hall Hulk and Hawkeye realize that Thor hadn't graduated. Eventually they go through the trials as three are only meant to compete. As his teammates passed their trials Thor had opened the door from Valhalla releasing Loki and some undead warriors as he did not answer the second riddle correctly, the first time.

Asgardian Physiology: Thor possesses all the conventional attributes of an Asgardian God. However, as the son of Odin, his attributes are more developed than average Asgardians to a certain extent. His power is so advanced that Tony has describe him as a Living Hulkbuster.

Mjolnir: Through the use of this mystical hammer, Thor gained another vast set of supernatural powers and abilities. Thor shares a connection with Mjonir, which can be severed both willingly and in the case that Thor dies. 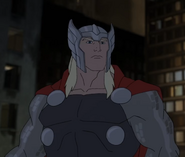 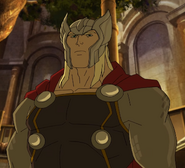